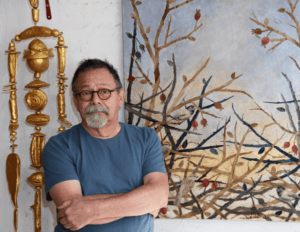 Oklahoma born artist Paul Medina has been making art for over 50 years. He has always worked in a mixed media format, saying he was “much too restless” to be confined to any one medium. Part of the joy of making art is the struggle through the unknown of materials and new tools. The main search of diverse mediums has been to find the right combination to express his concepts in the best possible way.

His themes have remained constant through the years. Capturing human truths, the ether that binds us all in countless ways, has been the overriding goal of Medina’s work.

Through the late seventies and on into the early nineties, Medina flourished as a gallery artist. He was represented throughout the United States; doing many one and two person shows each year. Besides the many galleries that represented Medina over the years, he also exhibited at the Oklahoma Museum of Art, The Philbrook Museum of Art in Tulsa, and the Heard Museum in Phoenix, Arizona.

Throughout his commercial success, he amassed collectors from all over the world including writer Judith Blume of New York, the late actor, Robin Williams of San Francisco, and Yannick Noah of Paris, France to name a few.

In the early nineties came a crucial period for Medina. He took a break from the gallery business and concentrated on developing a more personal approach to art making and refining his craft. This period created a body of work that continues to this day. Each piece tries to encapsulate how the artist feels about the world and the subtle emotions that we all share.

Today, Medina continues to try new things, working with clay and wood and creates painting using acrylic paints and other mixed mediums. He keeps busy with numerous commissions and occasionally exhibits locally and in surrounding states.

Medina is mainly of Spanish and French descent. Although not raised in the traditional ethnic heritage of his ancestors, his work, in many ways, reflects the artistic traditions of those cultures. He has spent his life learning of these cultures that have, without doubt, marked his work in striking way.

Paul Medina lives with his wife of many years, Grace Medina, and his faithful dogs, Ernie and Annie in his studio home in Oklahoma City.